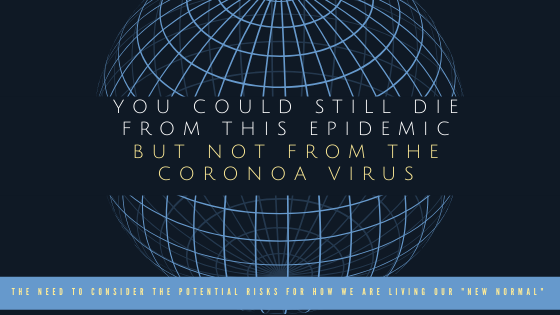 YOU COULD STILL DIE FROM THIS EPIDEMIC, BUT NOT FROM THE CORONA VIRUS

EATING DISORDERS
I want to mention that I am a certified as an eating disorder specialist by the International Association of Eating Disorder Professionals. So what I am writing here is based on years of experience as well as what I am hearing from many, many people. So, nothing I write here is based on any one or even two individuals.
As listed above, suicide is more common with someone who has a diagnosis of an eating disorder. However, people who have eating disorders have the highest risk of mortality of any mental health illness due to a variety of factors (not just suicide).
There are over 30 million people in the US right now who have an eating disorder. People of all ages, genders, ethnicities, cultures and socioeconomic backgrounds have them. Nearly one person dying every hour as a direct result of an eating disorder.
Because of this, I feel the need to mention this as a major concern for all of us to be aware of in this Corona Virus Epidemic.
I will speak for what is going on in those areas where there are stay at home orders, as what I have been hearing so far is based on people who have been affected by such orders.
Because the gyms are closed, people are saying that they
o feel “guilty”, “bad”
o “anxious about getting fat”
o “know they have already gained weight”
o “depressed”
o “hopeless”
o “afraid to eat because I can’t burn it off”
o “just decided to eat everything, anyway because what’s the point if I can’t work out?”

Because the “good/healthy” foods were not available at the store when they went, they could only buy the “bad” foods and are:
o “Convinced I am going to gain a ton of weight while I am stuck at home”
o “Throwing up everything I am eating because I am afraid to gain weight”
o “Feeling disgusting”
o “Telling myself I can’t eat all day tomorrow”

Because people feel completely out of control due to not being able to control much in their lives right now, I am seeing a marked increase in eating disordered thoughts, feelings and behaviors in people who have eating disorder diagnoses. Contrary to what many believe, eating disorders are not about the food in so much as they are about control.
When things feel out of control (life circumstances, feelings, etc..), then they can feel a sense of control by using food (restricting, overexercising, etc..). Food can also fulfill and need and provide support or an escape at times when everything feels overwhelming and completely out of control.
My fear is that the longer this epidemic goes on and the longer peoples’ lives are disrupted, the more severe some of these eating disorder behaviors will become. This is of real concern for those people who are living alone in these times of stay at home orders where they truly are not in direct contact with other people.
Whereas someone with an eating disorder might have normally gone to work and seen colleagues who might have been concerned enough to mention if they looked “too pale” or asked if they felt alright after they had not eaten for days in a row, with the way things are now, nobody will be seeing them or mentioning such things.
Furthermore, if someone is malnourished or engaging in purging behaviors (i.e self-induced vomiting, fasting for days, diet pills, etc..), several things can happen. For one, they could pass out and hit their head on something and have a head injury. They could have a heart attack. If someone is engaging in their eating disorder behaviors and lives alone, they truly could be at risk for dying. People can and do die from these illnesses and they need to be taken seriously.
When I heard the things I did over the past few days, I did start to get very concerned about the ways in which this epidemic is impacting people that we have not thought about.
Everyone now says that we “should” have acted sooner to prevent the Corona Virus getting this bad and causing so many to get sick and die. I don’t want to hear later on that we “should” have thought about how our mental health and well-being “could” have been affected by us being forced into “sheltering in place”.
So, I am writing about it now in the hopes that we can get ahead of it and put some interventions into place. Let’s face it…if this really IS the only way we can stop this virus, and we can’t control or stop the orders by which we must live right now, then let’s at least talk about how it could affect us so we can get ahead of it and try to prevent this from becoming an even worse situation than it already is.